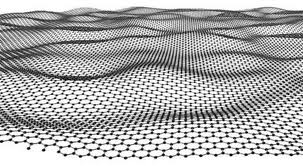 Today’s computer chips sit on a silicone wafer, but the future computer may use nanotube fabrication or graphene fabrication instead. A graphene sheet is only one atom thick with nearly zero mass, and a nanotube is a ‘rolled up’ sheet of graphene with a diameter of one nanometer. These are considered the future of transistor manufacturing because these structures have excellent properties, such as electrical conduction, good strength and efficient heat properties, plus they can be used for many other types of materials as well.

The two discoverers of graphene earned a Nobel Prize in Physics in 2010. Soon after, the EU invested 1 billion euros, and MIT created a dedicated graphene laboratory. Investors worldwide are investing in graphene and working to create applications for it. Samsung already has over 200 patents on graphene and Apple has investing in it.

Graphene is the strongest material ever discovered, even 100 times stronger than diamonds. Compared to steel, it trumps that material by 200 times! However, it does not have the inherent rigidity of steel, so it can be used in applications that required flexibility, such as textiles and protection for anything from glass (it is mostly transparent) to batteries and solar panels.

Graphene is expected to become a leader in semiconductors. Right now, it is a super conductor, and the challenge is to find a way to ‘toggle’ it off. They are making great inroads in this field. Patents have been applied for using graphene in fuel cells (Kia and Hyundai Motor Companies)

As a super conductor, graphene has application in the medical field, such as products to regulate patient body temperature, cellular repair, nano-bots for surgery and much more.

Graphene is the leading candidate for nano-electronics in the future. Although not yet accomplished, it is predicted that the super conductivity of graphene will support clock rates up to 1000 times faster that today’s electronics! Recent testing has confirmed these predictions on a smaller scale. For that reason, graphene is the probably successor to the silicon based electronics of today, and hybrid components with both graphene and more traditional components are even possible.

The future of textiles is flexible conductivity and graphene is at the forefront. It can be a transparent wearable textile. Graphene based textiles have been created to create a material that is tougher than Kevlar or spider silk. It is theorized that graphene could be used as a skin-like coating for robots, which can transfer information about heat, touch, and other senses or properties.

One little know property of graphene is that it is super slick and can repel water better that any other known material. At the same time it can be used to control evaporation because of those properties. A thin transparent layer could be used to limit evaporation over a body of water. It could also potentially be used to control body heat through temperature control. Another application (since graphene is transparent and super repellent) would be a coating for windshields.

This is an ongoing frenzy. In one test, researchers applied a charge to graphene which produced a heat that was 1/2 the heat of the sun (2500 degrees). With this amazing property, graphene could be useful in creating nano-machines that could act as a cutting torch to do surgery at the cell level. No wonder graphene is called the miracle material!