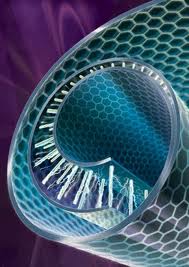 then something comes along that transforms nearly every aspect of our lives. This amazing material is set to change the world – Graphene

Graphene used to be difficult to produce. Now, recent scientific advances have changed everything.  Breakthroughs from South Korean researchers, Cambridge University, Case Western Reserve University, and many others have led to graphene fabrication techniques that are dependable and cost effective, with more discoveries right around the corner.

It was only 2004 when graphene was discovered, and now predictions are that it will completely change the world. It is the thinnest material known to mankind, being a single atom thick, yet it is 200 times stronger than steel, making it the strongest material ever measured. It has amazing electrical properties, is flexible, and energy efficient.  Graphene may be the impetus for completely new electronic devices. It has useful applications in manufacturing, science, medicine, space, clothing, and the military.

Proponents predict that quantum computers will use graphene to replace silicon since the conductivity is the best of any material know at room temperature. It can be used to create amazingly strong carbon fibers, and can be transformative for communication devices, medical implants, sports equipment, transparent touch screens, and solar absorption materials.

The development of graphene transistors (to replace silicon) may result in faster speeds and improvements in computer chips. Other potential applications include replacement of carbon fibers in composite materials, high-power high-frequency electronic devices, stronger medical implants and better sports equipment.

Among others, the Air Force Office of Scientific Research is studying graphene. According to Dr. Jogn Boeckl of the Materials and Manufacturing division at the Wright-Patterson Air Force Base in Ohio,  “Researchers predict that graphene will be as transformative as the television, atomic bomb, and silicon chip. It has the potential for enormous impact on Air Force capabilities, such as enabling band-hopping radar and leading to radio frequency semiconductors that are 100 times faster than the current state-of-the-art. Graphene may lead to the production of lighter aircraft and satellites, and may be used in sensors, electric batteries, transparent conductive coatings for solar cells, and in a variety of other applications.”

As transformative as television? Think how television changed the world … this is the future, and the future is now. Graphene is now able to be fabricated and manufactured with relative ease. The new products and applications of graphene will be amazing to watch.